A New and Innovative Cooling Technology

SkyCool Systems has developed a thin film coating and rooftop cooling panel that passively reject heat to the sky. The film and panel can cool below the ambient temperature with no electricity input, and without evaporating water. Remarkably, our films can even cool to sub-ambient temperatures while under direct sunlight.

SkyCool’s patented dual-mode film rejects the majority of incident sunlight and emits infrared heat to the cold sky. The cooling effect from our film occurs through a natural phenomenon called radiative cooling. Radiative sky cooling occurs all the time because Earth’s atmosphere is partially transparent to infrared thermal radiation. As a result, sky-facing surfaces emit more energy as thermal radiation to the sky than they receive from it. This allows a surface that’s looking up to the sky to essentially send out some of its heat.

SkyCool’s film acts as a high-tech mirror, reflecting heat out to the cold expanse of space. Prior to our work, the radiative sky cooling effect was not observed during the day because the sun heats up all outdoor sky-facing
surfaces. Our film reflects the light and heat of the sun, allowing the radiative cooling effect to occur day and night and cooling 5oF to 10oF below ambient air temperature while under direct sunlight. 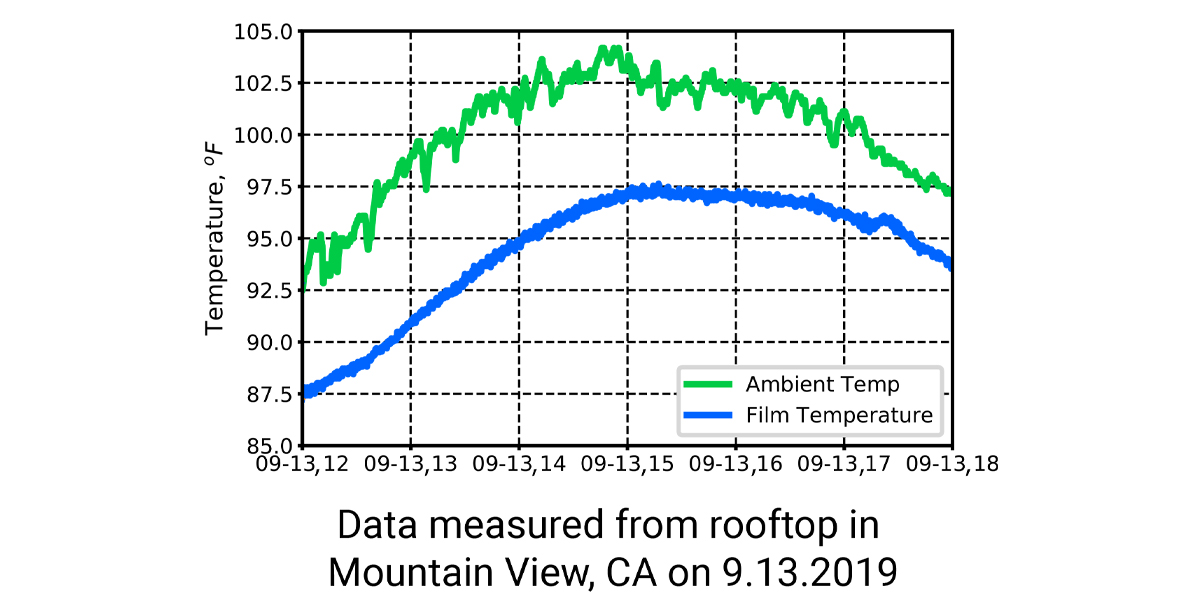 We’ve developed a breakthrough platform cooling technology by applying our dual-mode optical film on the surface of an aluminum panel with fluid channels behind the panel. The film keeps the panels and any fluid flowing in them cool 24/7/365. By connecting the panels to air conditioning and refrigeration systems, we enable the underlying cooling systems to run more efficiently. The estimated electricity savings for applications with persistent cooling loads is greater than 500 kWh/m2/year (or about twice the generating capacity of a solar panel).